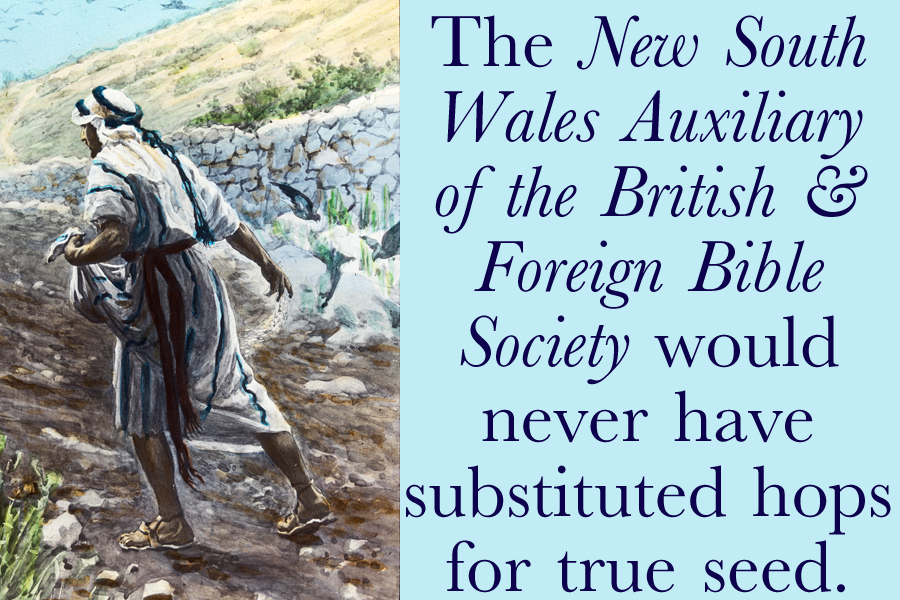 Certainly, the Australian Bible Society has wandered and reeled far from its origins.

Let’s turn back to an early meeting of the Auxiliary Bible Society of Australia Felix, as reported back in the Melbourne Argus, 7 November 1849. In those days, the King James Bible was THE English Bible.

For long centuries the British people in all their settlements have enjoyed the incomparable blessing. More copies of the Divine Word have been published in our language than in all other tongues combined, and the numbers of the English translation annually issued far surpass those of all the world beside.

This fact demands gratitude to the glorious Author of the Eternal Truth, and should excite in the breast of every Briton, a sense of deep responsibility, demanding a profound regard and practical respect for God’s word and commandment.

In truth, wherever the British tongue is heard there also the British Bible is found, and the servants of God, in this great empire, are concerned that the Bible shall be possessed, and perused, and obeyed, by the people, as the palladium of our liberties, and the instrumental cause of our excellence.

That sounds like a golden age of Australian Christianity. The Scripture prophesies about the current state of Christianity in Australia.

In Bible days, the Assyrian Empire came and conquered them. How can we resist Russian aggression if we are not in line with “Temperance”? Step one in this temperance regime is to turn back to the good old King James Bible which made the British Empire great.

The Bible when believed, will make Australia great again. Pretty much people need to get silent and get humble.

“Keep silence before me, O islands; and let the people renew their strength: let them come near; then let them speak: let us come near together to judgment.” (Isaiah 41:1).