Jesse Duplantis said that in Heaven the name of God is JEHOVAH. This is the word in the King James Bible. The name “JEHOVAH” is rejected by modern versions and modernists. 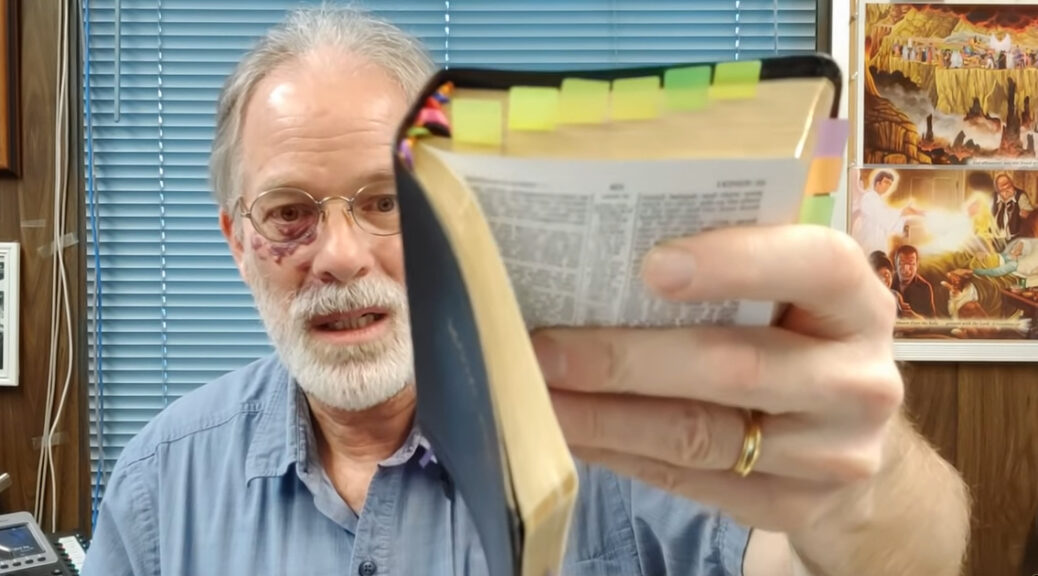 David Daniels, from Chick Publications, made a video (8 April 2021) where he discussed the Pure Cambridge Edition of the King James Bible. Daniels has made various good videos and his ministry has been generally helpful. He also wants to stick with the King James Bible, which is laudable.

Daniels begins by asking whether people should throw away their King James Bible if it is not a Pure Cambridge Edition.

My answer is that no one should be throwing out the King James Bible. Of course, we should use the Pure Cambridge Edition.

Would anyone use a book with typographical errors when they have another printing of that same book which doesn’t?

Typographical errors don’t invalidate the version and translation of the KJB. But you wouldn’t want to use unstandard and bad printing when you have the option for good. The word “pure” in “Pure Cambridge Edition” is talking about correct spelling and typography. It is a different measure or kind of purity than when talking about one version/translation versus another.

None of these are causing the loss of God’s words, but obviously correcting typographical errors and the standardising of the spelling and grammar has been a good thing.

There are a line of corrections from 1611, 1629, 1638 to 1769 and beyond. The Pure Cambridge Edition is an approximately 20th century correction of the Cambridge adoption of the 1769 editorial corrections (which took place in the 1830s under Thomas Turton).

In fact, in general, changing a word in any document may change some sort of meaning. Not that the actual word of God is changed, but the potential for misunderstanding arising from an editorial inconsistency is the issue.

It is obvious we wouldn’t accept a typo like “Jesus” for “Judas” or vice versa.

Doctrines or doctrinal precision matters, and that is why words, lower case and capital matter.

Saying that the case of letters does not matter, or that because in Greek the Bible was written in all capitals (uncials) or all lower case (minuscules) … the Bible has been translated into English, and clearly capitals do matter.

Would Daniels accept a King James Bible printed without capitals? Would he accept one that always put “god” instead of “God”? I don’t think so.

Daniels is not understanding the differences in words, so when he comes to the examples of “flieth” versus “fleeth”, “further” versus “farther” and “bewray” versus “betray”, he thinks there is no real difference.

But there is. I have written about these before, and information is also in my booklet “Glistering Truths”.

Simply, the word “flieth” means both to flee and to fly away, as the cankerworm turns into a flying insect. Whereas “fleeth” does not have the meaning about the flying insect.

And as for “bewray” this is a word from Anglo-Saxon meaning to convey inadvertently. Whereas “betray” if from French, and means to trade for. Very evidently these are two different words with two different meanings.

Daniels needs to recognise that distinct words have distinct meanings. To ignore or deny this is simply anti-intellectualism.

IS DANIELS SERIOUS THAT HE WON’T USE AN EDITION CALLED PURE?

Daniels said, rather strangely, that he wouldn’t use an edition called “pure”.

Would he use an edition with no name?

Would he use a mid-twentieth century printed Cambridge KJB?

Conversely, would he use a grossly misprinted edition? What if it was called “The Grossly Misprinted Edition”?

Many Christians who love and use the King James Bible have realised that words and letters do matter, accuracy matters, and there is everything good about everyone using the same edition and knowing that it has every editorial choice right.

The answers here address any concerns, clear misconceptions and really explain why it is good to use a particular standard edition of the King James Bible.

10 The preacher sought to find out acceptable words: and that which was written was upright, even words of truth.

11 The words of the wise are as goads, and as nails fastened by the masters of assemblies, which are given from one shepherd.