Confessing and professing are not the same thing.

In looking at the usages of these words, I would suggest that confess means to:
a. admit guilt
b. proclaim plainly agreement to a doctrine
c. reveal or disclose thoughts

Whereas profess means to:
a. claim, by speaking or proclamation
b. state one’s position or ability
c. lay hold in faith by speaking

Therefore, we can conclude that what some people call faith confessions (not to be confused with doctrinal confessions) really would better be called faith professions, like in this verse:

Mark 11:23 For verily I say unto you, That whosoever shall say unto this mountain, Be thou removed, and be thou cast into the sea; and shall not doubt in his heart, but shall believe that those things which he saith shall come to pass; he shall have whatsoever he saith.

1 Tim. 6:12 Fight the good fight of faith, lay hold on eternal life, whereunto thou art also called, and hast professed a good profession before many witnesses.

1 Tim. 6:21 Which some professing have erred concerning the faith. Grace be with thee. Amen.

Heb. 10:23 Let us hold fast the profession of our faith without wavering; (for he is faithful that promised;)

Now, you can confess you agree with these Scriptures, but professing them means you act accordingly.

Charles Clover wrote in 2011, “the leader of the Eurasianist Movement, Alexander Dugin, … has worked to make dictatorship hip. … In Mr Dugin’s vision, a reborn Russia is a slightly retooled version of the Soviet Union with dystopian echoes of George Orwell’s 1984, where Eurasia was one of three continent-sized super states (Oceania and Eastasia being the other two) in perpetual war.”

In the Scripture, we find this prophecy, “And at the time of the end shall the king of the south push at him: and the king of the north shall come against him like a whirlwind, with chariots, and with horsemen, and with many ships; and he shall enter into the countries, and shall overflow and pass over.” (Daniel 11:40). 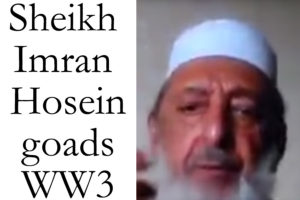