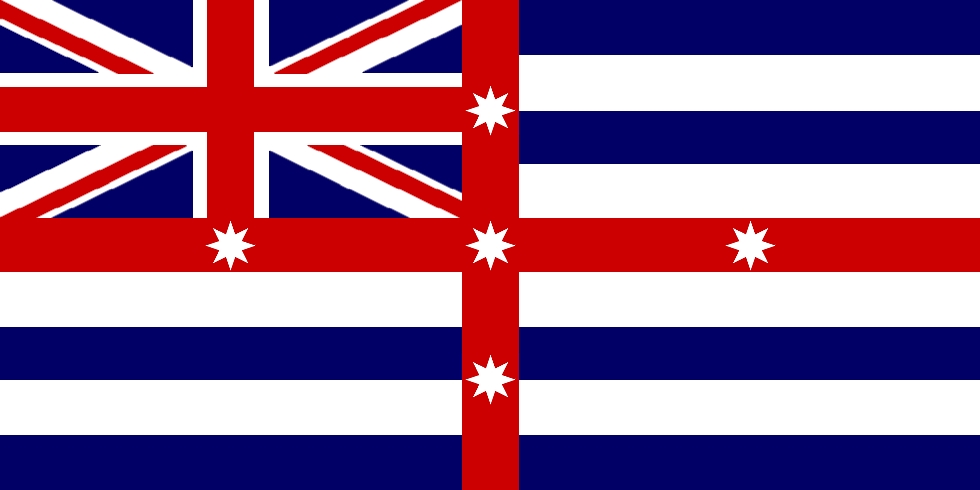 What is the Hephzi-bah doctrine?

2 And the Gentiles shall see thy righteousness, and all kings thy glory: and thou shalt be called by a new name, which the mouth of the LORD shall name.
3 Thou shalt also be a crown of glory in the hand of the LORD, and a royal diadem in the hand of thy God.
4 Thou shalt no more be termed Forsaken; neither shall thy land any more be termed Desolate: but thou shalt be called Hephzi-bah, and thy land Beulah: for the LORD delighteth in thee, and thy land shall be married.
ISAIAH 62

8 Hear now, O Joshua the high priest, thou, and thy fellows that sit before thee: for they are men wondered at: for, behold, I will bring forth my servant the BRANCH.
ZECHARIAH 3

12 And speak unto him, saying, Thus speaketh the LORD of hosts, saying, Behold the man whose name is The BRANCH; and he shall grow up out of his place, and he shall build the temple of the LORD:
ZECHARIAH 6

The BRANCH can be taken as a symbol, and it follows that it can be taken as an the acronym, each letter representing a word and concept: Book, Remnant, A pure language, Nation, Communication and Harvest.

Further, in the Hephzi-bah doctrine, it follows the idea of four civilisational areas coming together to a central point in the Church Restitution, which are: Religion, Nation, Politics and Culture.

Book. This says that there is one Bible which is exactly, precisely perfect, to be made the common heritage of the whole world generally. This is the King James Bible, specifically, the Pure Cambridge Edition. This book shows us the name of God, JEHOVAH.

Remnant. This says that Church history has been working towards the triumph of the Christian church in the latter days, and that even now there are believers and the gathering of proper doctrines (e.g. proper Pentecostalism), for unity of faith.

A pure language. This says that English is spreading abroad so that world missionisation can occur by English-speakers, that not only has English been prepared to be able to conceptually convey the Gospel, but that it is out there as the means for using the best Bible in the world for evangelism.

Nation. That among all nations, particularly the union of Australia and New Zealand are to be used of God, and for the conversion of the Jews, and great worldwide revival.

Communication. This says that the communication technology being prepared, infrastructure built and transportation possibilities at hand, that this message may reach the whole earth.

Harvest. This says that all the seeds sown must come to fruition, and that we are to reap them, at the set time and season, even at the fall of Gog. 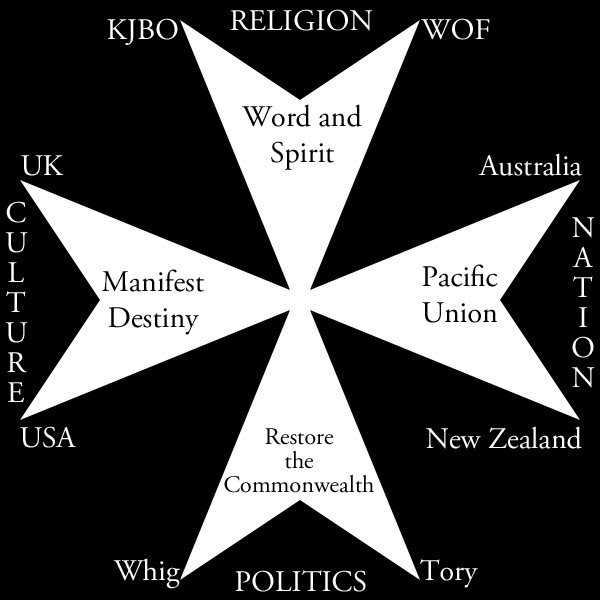 The convergence of these four movements, i.e. Word and Spirit, Pacific Union, Restore the Commonwealth and Manifest Destiny are central to Church Restitution.

This thinking follows on from the progress of Joseph Mede, John Milton, the Hartlib Circle, etc. and with emphasis on Oliver Cromwell.

It is a belief in the Church Restitution, where all the seed sown of history must be harvested, and what the devil has stolen must be restored seven-fold.

It is, unashamedly, a creationist and providentialist view that builds upon notions put forward by Cromwell, Josiah Strong, Churchill and others, that says that the people of Ashkenaz, that is, particularly the Anglo-Saxon civilisation, is to be used of God in this mighty way in the latter days, not after the measure of the flesh, but after measure of the spiritual, particularly for upcoming outpouring of the Spirit for all nations and for the conversion of the Jews.

It says that we are those who hold aloft an ensign to the nations, we sound the call of the trumpet. It says that every one of those verses of Scripture, too numerous to quote, are coming to pass, when all these things are “finished, as he hath declared to his servants the prophets.” (Rev. 10:7).

The Hephzi-bah doctrine is a millenarian view about our heritage and destiny, how we are vessels fit for the Master’s use. It puts us as the victors over Eastern Antichrist and as having the greatest responsibility for accomplishing the fullest measure of the Gospel, the outworking of grace for release and refreshing, so that the whole earth shall be filled with the knowledge of the glory of the Lord.

The English language is the most widespread language being used today. This is no accident, but part of the design for world wide evangelism.

The day of Pentecost indicated the beginning of the reversal of the tower of Babel. No longer would there be scattering into separate languages, but the beginning of bringing people to the same message, and consequently, one language. That process has happened slowly.

The Reformation was particularly a time where the progress of Christianity moved toward a single language. The medieval world had been divided between primarily the Greek-speaking and the Latin-speaking traditions. Protestantism has become more and more apparently dominated so completely by English, that all progress of a spiritual nature has to take place within English. That is to say, that all advancement such as Wesley’s message, and all spiritual outpouring, such as the Pentecostal Revival, have been more specifically reliant on English and happened in English-speaking areas, and therefore has created such an English-rich environment that no spiritual work would happen without it being in English.

Not only has the majority of missionary activity come from English-speakers, but all the highest theology and knowledge of Christian doctrine exists specifically in the English language. English has become the spiritual language.

This means that the best Christians, the best books and Christian thinking, is in English. The best churches, the best doctrine, the highest advances, are found in our tongue.

We find, more importantly, that among all copies of the Bible that exist, that the best translation and the best version in the whole world is the King James Bible. This is no accident, because it means that there is a global language which is ready to be used for the teaching of the highest Christian knowledge with the best Bible. It has all been designed for the most widespread evangelism.

These ideas concerning Divine Providence are not just based on mere observation or conjecture, but are in line with what we find prophesied in various passages throughout the Scripture.

We find in Revelation 10, for example, a prophecy which Historicists have identified is about the Reformation. The attributes of this prophecy show that it is about the English-speaking Christianity and the English Bible coming forth as a witness to the world.

8 ¶ Therefore wait ye upon me, saith the LORD, until the day that I rise up to the prey: for my determination is to gather the nations, that I may assemble the kingdoms, to pour upon them mine indignation, even all my fierce anger: for all the earth shall be devoured with the fire of my jealousy.
9 For then will I turn to the people a pure language, that they may all call upon the name of the LORD, to serve him with one consent.
(Zephaniah 3:8, 9).

Having one Bible is a basis for religion is important, because it provides a foundation for faith and practice. We read another remarkable passage in the Scripture, which specifically points to “another tongue”.

11 For with stammering lips and another tongue will he speak to this people.
(Isaiah 28:11).

Like other prophecies, this passage has two meanings. The symbolical meaning, as understood by the Apostle Paul, is the speaking in tongues seen in the New Testament. However, the literal interpretation would be that another language comes to be used by the Jews, and it is in that language that the Gospel is preached to them.

Never have the Jews properly responded to the Gospel, so it could not be said to be Greek, Latin or any other language. However, the Jews do know English and the Gospel which is to be preached to them in that language is to have the great success not seen in previous generations.

Here is an opportunity for standing up for Biblical views and traditional standards. But no, The Australian newspaper reported her saying, “I don’t operate on the extremes because the world we live in is about finding ­middle ground to coexist”.

This seems to indicate a view that if the Bible says, “Thou shalt do this,” and the world says, “Do that”, this kind of person is going to find a middle position. Honestly, the middle ground is the most anti-Christian position of all.

These are Jesus’ words. He is demanding a people that stand for Him. Else, you can be fully committed to the world and its ways. But don’t try to be friends with everyone.

It is always bad when someone has the chance the stand up for Christianity, but instead they decline to really fight for what is right. Senator Gichuhi actually had the temerity to censure Pauline Hanson and swipe Christians in Parliament while she believes, according to The Australian newspaper, that the most important issues are “the state of aged care in ­Australia and financial literacy.” Really? With all the attacks on traditional values, abortion epidemic, rising national debt, war on marriage and the mainstreaming of leftist hatred of Australia, it seems like Senator Gichuhi’s “Christian” concerns are out of touch with reality, out of step with the Bible and out of order for a prosperous society.

It is dangerous to have a “Christianity” that actually is against what Christianity really means. It is often said that in Africa, South America and Asia there are movements advancing in Christianity way beyond our own. That’s unlikely to be correct, but even though Christianity is in serious decline in the West, this can be reversed. The biggest problem that needs to be overcome here is the decline in power and knowledge of Pentecostalism.

Smith Wigglesworth said, “I can see even in this Pentecostal work, except we see there is a real death, God will say to us, ‘Come out.’ Unless Pentecost wakes up to shake herself free from all worldly things and comes into a place of the divine-likeness with God, we will hear the voice of God, ‘Come out’ and He will have something far better than this. I ask every one of you, will you hear the voice of God and come out? You ask, ‘What do you mean?’ Everyone of you knows without exception, there is no word for Pentecost, only being on fire. If you are not on fire, you are not in the place of regeneration. It is only the fire of God that burns up the entanglements of the world.”

True Christianity has a world-reaching standard and call that must set the record straight, even if it contradicts messengers coming from some country which has birdlife in abundance.

(Also, being called the Australian Barack Obama is not an endorsement.)