PSALM 4:2 “O ye sons of men, how long will ye turn my glory into shame? how long will ye love vanity, and seek after leasing? Selah.”
PSALM 5:6 “Thou shalt destroy them that speak leasing: the LORD will abhor the bloody and deceitful man.”

Leasing means being loose with the truth, that is, lying. 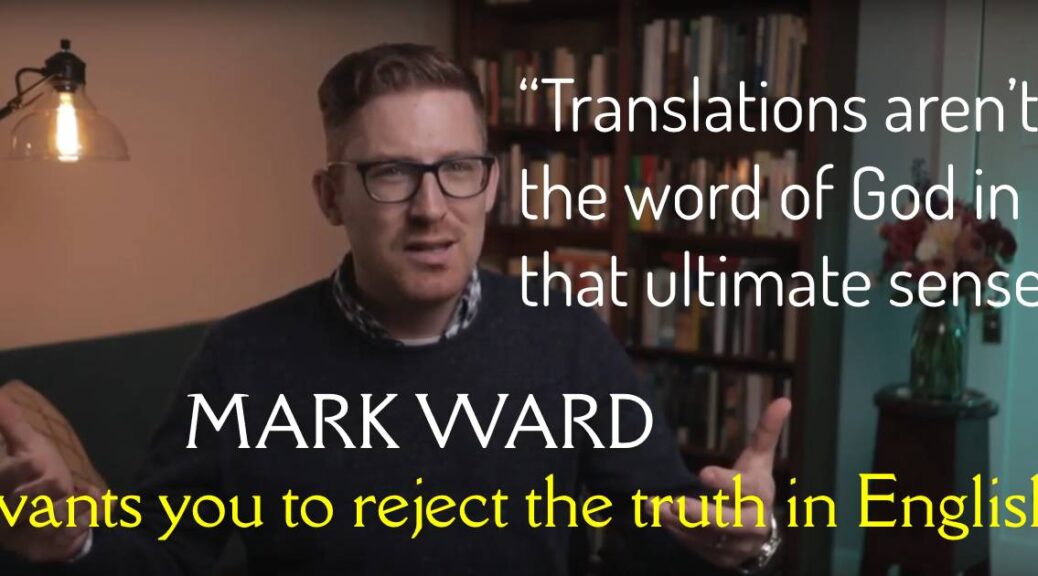 Mark Ward has been making videos which pretend to explain what words in the King James Bible mean.

The problem is that his starting point is not to respect the King James Bible, nor to uphold Biblical English, nor to discern the correctness of its “glistering truths”. Rather, Mark Ward’s real agenda is to undermine the KJB, to put it in a bad light, and to present new translations as better.

In Mr Ward’s mission to attack the King James Bible, he argues the following: “I want to teach you what language is like, the ways language changes. I want you to see how random and varied those changes are. Language change is a fog that creeps over a landscape, leaving some bushes in full clear view, and other obscured, or half obscured, or 32.8% obscured. Language change is gradual and nebulous. We aren’t likely to wake up one day and discover that, oh, English has taken a great leap forward, or backward. Not unless there’s some major geo-political catastrophe that alters our linguistic situation considerably.” (Video on Moisture.)

Notice, now, that his doctrine is not a Biblical doctrine, but a doctrine of men. His view on language, or what he thinks about the King James Bible’s language, is entirely natural, unspiritual and in opposition to the truth.

Let’s begin with a few Biblical truths.
1. God is in control.
Who declares the end from the beginning in Isaiah 46?
Who raises up kings? Daniel 4:32b states, “the most High ruleth in the kingdom of men, and giveth it to whomsoever he will”. Daniel 2:21 says, “And he changeth the times and the seasons: he removeth kings, and setteth up kings: he giveth wisdom unto the wise, and knowledge to them that know understanding”.
2. God is in control of language.
God divided the languages at Babel.
The Spirit gave the tongues on the day of Pentecost and beyond.
The fact that English was raised up as a receptacle for the Gospel and evangelistic is a truth shown in Historicist Prophecy, and by Providence.

Mr Ward’s starting point is Infidelity. He has accepted the logical outcomes of Enlightenment philosophy. They had a deistic view, that God is like a watchmaker who made the clockwork universe, and now things continue in their own cycles without His direct input. Even worse, such people will reason that the natural processes are somehow the work of God, and they see errors, random chaos, uncertainty, perplexities everywhere. This, they think, is the work of God.

“With the pure thou wilt shew thyself pure; and with the froward thou wilt shew thyself froward.” (Psalm 18:26). Because such people expect to see mistakes and errors, and think God is essentially choosing to outwork in that fashion, they only see mistakes and errors, and never a pure Bible or a divinely raised up and guided English language. They do not see Biblical English. So, of course, people like Mark Ward will mock and scoff at the King James Bible’s language, they will smugly make their little pronouncements against it. But such attacks are dangerous, and in fact invoke divine retribution. Teaching little ones to offend was seen as a heinous sin in the teachings of our Lord and Saviour.