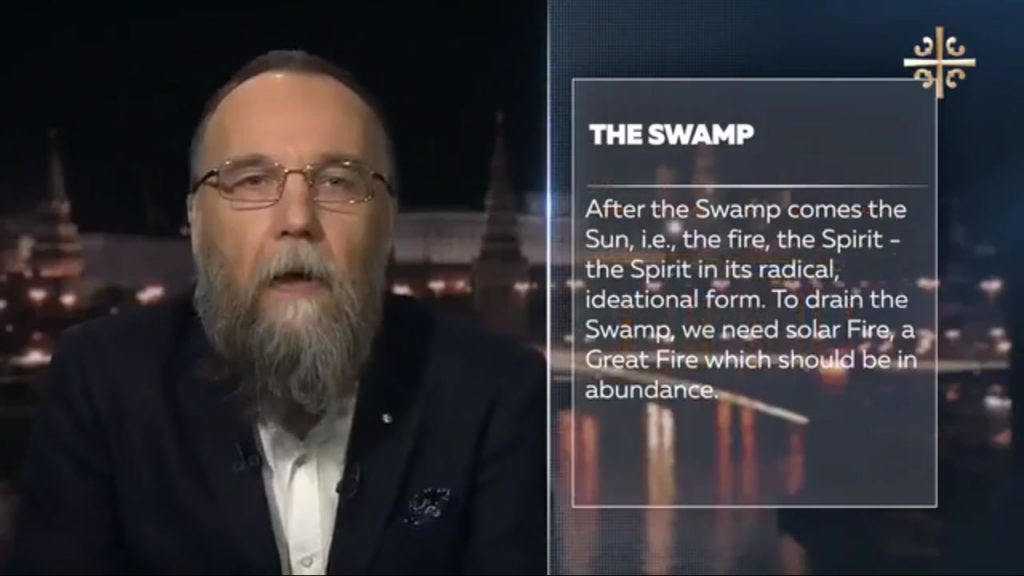 The morass of filth and spiritual compromise today is being addressed by two adverse powers. One approach is being presented by Alexander Dugin, the other by the Bible believing Spirit-filled Christianity as taught in sincerity and truth.

Dugin, a leading Russian political philosopher, is calling on the power of the Sun (i.e. Helios, the mystical sun) to burn up the “swamp”. (A reference to a Donald Trump description of the American establishment.)

However, the Scripture has laid out its solution to the “lovers of their own selves”, etc. It says, “But they shall proceed no further: for their folly shall be manifest unto all men” (2 Tim. 3:9a). When political correctness, lies and compromised Protestant Christianity comes to its full extant, it can “proceed no further”.

In our approach, there is a work of God to manifest His reign among the nations, “And the nations were angry, and thy wrath is come, and the time of the dead, that they should be judged, and that thou shouldest give reward unto thy servants the prophets, and to the saints, and them that fear thy name, small and great; and shouldest destroy them which destroy the earth.” (Rev. 11:18).

The time of the dead is the time when the spiritually dead should come to judgment. It is also a time for present day rewards for the believer. And importantly, the destroyers of the earth should be destroyed. The earth represents the current secularist system, but the destroyers of this are themselves to suffer destruction. (Much like how the Assyrian armies were an instrument of judgment on Israel and other nations, but then themselves were destroyed wonderfully after they came to fight against the God of Judah.)

Dugin’s call for solar fire upon the “swamp” (i.e. the “earth”) is only a limited solution. That same fire is intended to consume all gods, including the God of the Bible. To attempt to assert such forces against the God of the Bible is the one God no one should profess against.

This dark sun power was manifested in the White Russian struggle against Communism and at the founding of the Nazi movement. Instead of God rising to reign through the Gospel in the hearts of believers, associates of these White Russians taught of a “Magna Helio Force” and Mundilfari (the dark sun great wheel) of being.

Dugin further indicated the movement of the sun from the Western corner of the earth to the Eastern, to Russia. In doing so, he conveniently ignored the soldiers of the rising sun.

The sun was not created by God to be an instrument for the Eastern power in these latter days. The Bible expressly shows that the sun is to be darkened, showing that His words are more powerful than the claims of the Magog armies:

Joe 2:2 A day of darkness and of gloominess, a day of clouds and of thick darkness, as the morning spread upon the mountains: a great people and a strong; there hath not been ever the like, neither shall be any more after it, even to the years of many generations.
Joe 2:3 A fire devoureth before them; and behind them a flame burneth: the land is as the garden of Eden before them, and behind them a desolate wilderness; yea, and nothing shall escape them.

Joe 2:10 The earth shall quake before them; the heavens shall tremble: the sun and the moon shall be dark, and the stars shall withdraw their shining:
Joe 2:11 And the LORD shall utter his voice before his army: for his camp is very great: for he is strong that executeth his word: for the day of the LORD is great and very terrible; and who can abide it?